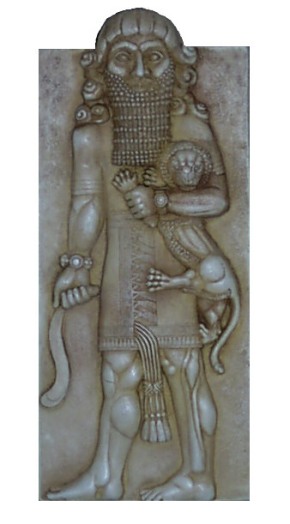 “Then, Samson went down to the vineyards of Timnath and a young lion roared against him.

The Spirit of the Lord came upon him so that, with nothing in his hands, he rent mightily the lion as though it were a young goat.”

“And then Samson found a jawbone of an ass and he took it and with it he slew heaps upon heaps of men to the number of a thousand.”

“You know, I’m not sure syncretism is quite the right word,” says Wen, eyeing the icon of Gilgamesh with some trepidation.

We are in the British Museum doing ‘research’ as Wen likes to call it.

Which means in Wen-Speak, among other things, more churches…

“Oh, him again. No one knows who Robert Graves is.”

“Well, they should! Anyway, in ‘King Jesus’ he has a Priestess of Astarte and Joshua-ben-Miriam go through a whole series of cave-bound images with each of them giving a different yet perfectly valid interpretation of the self same icon.”

“Inscribed in a cave.”

“Religious interpretation, I should have said.”

“Why isn’t anything, anything else?”

“It’s what we bring to the table!”

“I like that,” says Wen, looking slightly perturbed as I hone in with a Gob-Stopper to hand.

“Our own journey is entirely imaginary,” I continue in my obscure way, “that is its strength. Longman says so and he is never wrong.”

LORD OF THE DEEP: THE QUEST FOR IMMORTALITY

A DRAMATIC RETELLING OF THE EPIC OF GILGAMESH

The Oldest written story known to man…
What spiritual treasures lie hidden in this, five thousand-year old, Epic?
What can this ancient civilisation teach us about the questions of existence?
Join us on this quest of a life-time, next April, to find out…

*
‘Gilgamesh is among the greatest things that can ever happen to a person.’
– Rainer Maria Rilke.