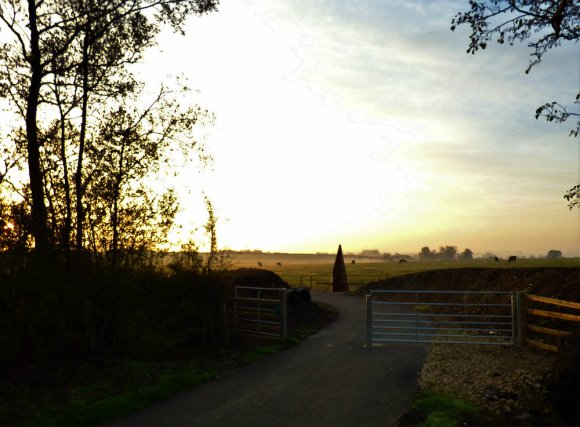 A new footpath has been installed close to the village, running for a few miles through the silent, empty fields. One of its entrances gives onto the road I travel every day and I have watched with mild curiosity as the work has been underway.

The path is part of a walking and cycling initiative to connect the village to the nearest railway station and, hopefully, reduce the need for cars on the road. It follows the course of the old Roman road, which probably followed the course of an older track, thus continuing a tradition of travel along this route.

My interest was caught when I noticed the workmen had installed a sculpture or two, glimpsed through one of the gates and through the thinning leaves on the trees. Aha, I thought, a Pointy Stone! Even after millennia there is something about a standing stone guarding the way that seems absolutely right.

A standing stone, guarding a way through the wilderness. Symbolically, it was perfect. If my theories were correct, a pointed stone was once used as a waymarker, allowing travellers to navigate across the empty landscape before the land was mapped and signposted. But our ancestors had marked the entrance to their sacred sites with standing stones too, signalling that here a new path opened before the seeker’s feet and that each step forward should be taken with reverence.

What they revered, we can only surmise and perhaps feel for ourselves as we too walk the land, but that these stones were held as important, both exoterically and spiritually can be in little doubt.

There is both permanence and impermanence to stone. It has already lasted longer than man can fathom by the time we lift and shape it, yet once it is exposed to the wind and weather, it will eventually crumble. It may outlast us by millennia, but to the slow life of stone such timescales mean little. 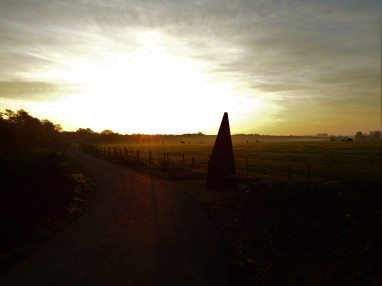 On the first morning where weather, time and traffic came together, I took the camera for a closer look. As the sharp, sculpted angles caught the light, I realised I was doomed to disappointment. The stone is not a stone.

The disappointment I felt was in direct proportion to the expectations I had raised for myself.  I was also disproportionately saddened in a way that is a little difficult to explain.

For a chill autumn morning, the scene was pretty idyllic. Frosted fields held a herd of grazing cows, half veiled by the rising mist as the sun awoke, whiting out the sky. Even at close quarters, I had to reach out and touch the ‘stone’ to be sure, though I could feel the truth. It was metal, pre-rusted, and the hollowness beneath the tap of my fingertips seemed to sum up, somehow, where humankind has lost its way.

With our focus fixed on survival and success, we still choose to ape the forms that have served us through the centuries. Even though their original meaning may be lost to us, we recognise their significance. There are modern pyramids across the world… our local one is neither tomb nor temple, but it is, I suppose, still a gateway to another world, being a cinema. We erect stone circles in new housing estates, but without regard to their alignments or place within the landscape, they are no more than overgrown garden ornaments. Monuments imitating the glories of a bygone age, they are as empty of life as the grave.

The hollow clang of the new ‘standing stone’ beneath my hand seemed to epitomise the hollowness of life for so many. We adhere to the form of old beliefs and systems without engaging with them or applying them to how we live. It made me consider how we walk the earth without any sense of its sacredness… and we do not even have to believe in any god to hold the planet we call home in reverence, but modern societies no longer do so…only individuals touch the heart of earth and feel its life.

The metal of the sculpture is already rusted; even its finish has been faked, encouraged, its ultimate end hastened. Appearances matter more than the reality as we seek to have now the fruits of time’s passage and the processes of nature. The stones of the ancients in this land have stood for five thousand years and more. Will the modern metal ‘stone’ last a tenth of that long?

Even so, the newly erected ‘stone’ serves a purpose with poles upon which the weary walker can rest and it makes for a striking feature in the landscape. Perhaps, after all, doesn’t really matter what the outward form of anything may take… including our own lives. It is how we use them on the journey that matters.

25 thoughts on “Missing the mark”