‘…So, what is the significant act?’
‘All the acts in the story are significant.’
‘What is the story about?’
‘It is about a Dust-Devil.’
‘For the human body there are really only five significant acts: the first is breathing. The second is eating. The third is defecating. The fourth is sleeping and the fifth is… copulating.
At least three of these are represented in the story.
Is there one act more significant than the others for this particular story?’
‘The sex act…’
‘Would it surprise you to know that this was a story told by a father to his pubescent daughter?’
‘It is a cautionary tale?’
‘It is a cautionary tale now but there are signs that this was not always the case.’
‘Those signs are?’
‘The fire-stick at the outset of the tale may not be an original component of the story.’
‘We are not told the nature of the creatures that were eaten at the camp sites.’
‘We are not even told that those creatures were actually eaten.’
‘Only vegetable stuff is eventually traded with the Dust-Devil and there appears to be a lacuna when the young woman looks around the cave house after slashing the neck of the Dust-Devil.’
‘Did she at one time in the telling of this story find the fire-stick there and then?’
‘The nature of the Dust-Devil appears to be equivocal.’
‘Is he killed or not?’

‘And what is a Dust-Devil anyway?’
‘Ninety-percent of the dust in any house, even a cave house, is comprised of skin shed from the body.’
‘Ashes to Ashes…’
‘Throughout the story there is a lot of emphasis on the correspondences between eating and copulating.’
‘The two concepts seem almost interchangeable.’
‘By cooking one makes unpalatable things palatable.’
‘At one time this may have been an ‘origin of cooking’ myth.’
‘For these people, then, cooking may have been ‘invented’ or ‘discovered’ by a female culture hero, or if you prefer a heroine…’
‘…Along with sleeping platforms and paper-bark canoes?’
‘That is also a distinct possibility.’
‘Presumably she wouldn’t have been turned into a rock in that version…’
‘…Presumably not.’
‘Who were these people? Where is the story set?’
‘The tale is set somewhere with a warm climate because of the mosquitoes.’
‘All that walking about with nothing but a digging stick for survival…’
‘It has probably got to be Aboriginal Australia.’
‘And yet there are elements in the story that are echoed in the mythologies of all people.’
‘The ‘held captive in a rock’ motif for example is familiar from the Arthurian Mythos…’
‘Both via the sword in the stone and in Merlin’s ultimate demise and perhaps even in the cave which traditionally holds the Sleeping King and his Knights.’
‘The Dust-Devil is reminiscent of some of the demons which in the Apocryphal Bible stories Lilith, the first Eve, is said to comport with in the desert.’ 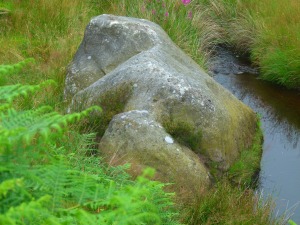 ‘… And how many times in the world’s mythologies does a protagonist cross a body of water in order to secure a boon for their people?’
‘In the folk-tales of these isles people are forever being turned to stone.’
‘How else could we explain all those stone circles plonked bang-smack in the middle of… now-here?’
‘They would have had to have walked there as people and started to dance before they were turned to stone right?’
‘Yeah, right…’
‘But stones or rocks with holes in them do make sounds when the wind blows through them and they could well have provided inspiration for the first musical instruments.’
‘I’d like to include walking and dancing as significant acts of the human body…’
‘…Any more?’
‘Making and playing musical instruments.’
‘That makes nine.’
‘You didn’t answer the question.’
‘What question?’
‘Why Myth?’
‘Because Mythology is ‘My Theology’ and the ‘my’ here does not belong to me nor does it belong to the ego either…’
‘It is not really about the body is it?’
‘What is it about?’
‘It is about the body being a vehicle for spirit.’