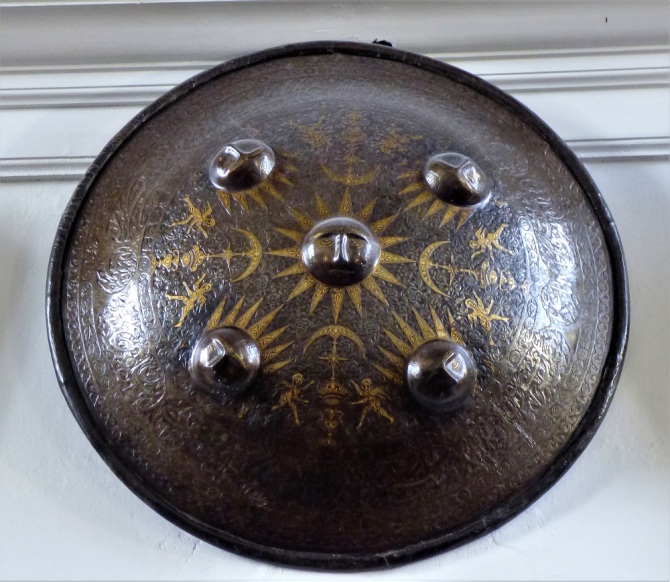 Two things struck me as we entered the State Rooms to look around the public parts of Bamburgh castle. The first was that the collection of objects that were on display was vast, rich and deserving of much more attention than we would have time for. We did notice, though, a shield that bore a remarkable resemblance to the crop circle we had been looking for at Cerne Abbas…

From decorated cradles to archaic helmets, ostentatiously carved furniture and delicate fans made of wisps of spangled gauze and ivory, all were displayed with no apparent order or relationship to each other. The symbolic comparison of a castle to the ego was evidently going to continue. It almost seemed as if the décor was saying there was no value to the priceless things on display except to be displayed. Now, I know that this is probably not the case at all. What can be left undefended by glass and barriers and survive the careless touch of tourists is the most likely reason for the items on display being chosen… but we had been asked to draw comparisons between the castle and the ego and observe our impressions.

I thought how many people I have met who define themselves by their achievements, success, wealth or possessions. I thought too how many of us seek to impress others in one way or another, and how our public faces reflect how we hope the world will see us… and decided that most of us fall prey to that desire in some form or another, even those who vehemently profess that they do not care a jot for how others see them; that very independence can become a ‘prized possession’.

The other thing that struck me forcibly was the lack of atmosphere. The two small salons, in spite of their beauty and décor, had no character at all; they felt unlived-in and ill at ease. It turns out that they were once kitchens before they became ‘State Rooms’, and their true nature was obviously at odds with their new finery. The castle is a grand and glorious place, though. Room after room is filled with history, art and portraiture, but it is not until you go deeper within its walls and reach the King’s Hall with its raised drawing room that there is any feeling of coherence.

Here, you can imagine the grand balls and state functions. It is supposed to be lofty, imposing, luxurious. It is not trying to be anything except itself… and, after the kitchen-salons, that gives a curious effect. Egoically, there is a statement there too; it matters little whether a place or a person is beautiful and impressive, or homely and humble… what matters is whether they are authentic… true to their nature and purpose. 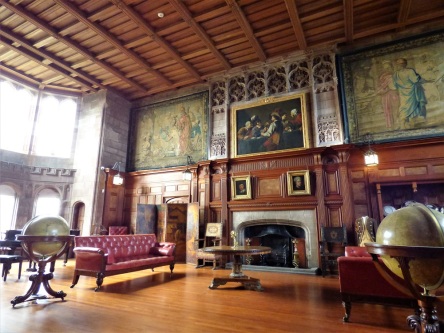 I could have spent weeks learning about the art alone. There were anomalies there too. The overtly regal castle held a good many pieces that struck an odd chord. For instance, there were the portraits of Napoleon with hs two Empresses… the Emperor of France who had come by his position on the heels of the Revolution that had guillotined the nobility.

The very Catholic iconography displayed throughout the house sits cheek-by-jowl with portraits of the Protestant King James and his wife, Anne of Denmark. It was James who, after his bride had been delayed by storms that he blamed on witchcraft, instigated the North Berwick witch trials and he attended the torture of suspected practitioners of the Craft.

One picture in particular caught my eye, a sixteenth century group of the Holy Family, attributed to Marcello Venusti and titled ‘Silence’. The geometric composition of the figures is striking enough, but t was the figures themselves that caught my eye. The Holy Mother watches a sleeping Child that we take to be Jesus. He lays across her lap in a similar attitude to a Pietà. Behind her are figures we assume to be an elderly Joseph and John the Baptist, who could be Jesus’ twin. It may have been the fact that the boys are painted as older than the usual babes that caught my attention. Or that only Mary and John have haloes…. I found it curious too that the Madonna wears green, and that the sleeping Child, who lacks a halo, is as pale as death. 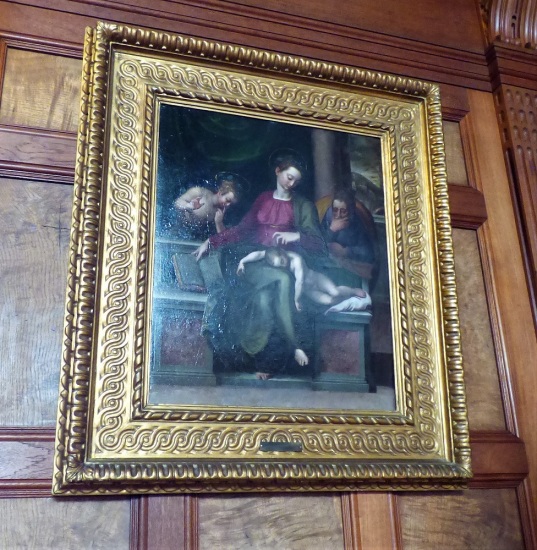 A little later research made the painting even odder. It was painted by Venusti, but the design was a detailed drawing by Michaelangelo. It is also very different from other versions of this painting. The ‘same’ painting at The National Gallery, for example, has the Virgin clothed in blue, the architecture and draperies completely different, none of the figures have haloes and John wears a leopard skin. And the text in the book that the Virgin holds is completely different. We can only assume it is meant to be a Bible, although that book would not be written until long after the Child’s death.

John makes a gesture of silence. Is he asking silence for the sleeping Child? Or indicating secrets…? Which painting is the ‘real’ Venusti? Are they all his? Are others copies? What does the difference in the text indicate? We would need a lot more time to unravel such mysteries… The ego too has its secrets, its blinds and confusions and it can take a lifetime to unravel them.

One mystery was solved though… although it leaves many unanswerable questions in its wake. There is a short corridor with steps leading through an arch. On one side, a huge tapestry, on the other a print of battles and reproductions of scenes from the Bayeux Tapestry. It has a disquieting ‘feel’ and I found I could not easily leave it. When I did leave, I felt compelled to turn around and go back, though I had no idea why. I spoke to Stuart who had followed me and turned to face him… finding that he was not there and I was, in fact, alone.

The moment left such an impression on me that I did some research when we got home. I am far from the only one to have sensed something there. During the war years the castle served as a hospital for soldiers, and one young man traumatised beyond bearing, committed suicide and shot himself in the head. He was seen and recognised after his death, seated on these stairs. 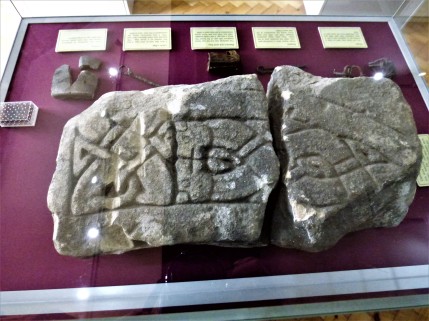 The lower we went in the castle, the more, it seemed, the life of its people made itself felt and the analogy of the ego continued to be apt. Most personal, in an odd kind of way, was the well in the basement rooms. The life of lord and serf alike would have depended upon its waters. The simple well bound their human lives together in a way no other artefact could show. 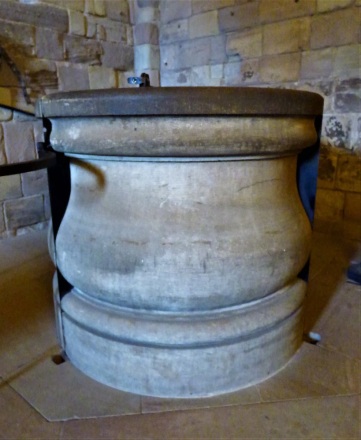 Lower still and we made the mistake of going into the dungeon. Expecting the empty rooms one usually sees in such places, we were confronted with graphic waxworks depicting every imaginable horror. Such things should never be perpetrated on living beings… and yet the ego can suffer the same levels of torture throughout its life. We witnessed one such torture being inflicted upon a child as we hurriedly left the room. You can imagine the scars the careless comment will leave. “This,” said the small child’s father, “is what happens if you don’t behave…” 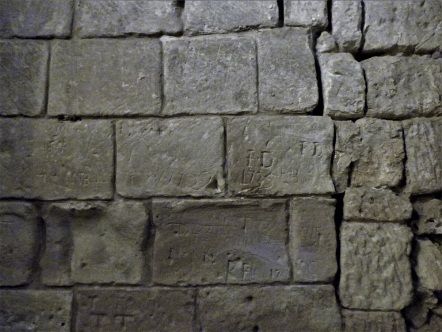 Far from the pomp and circumstance of the stately halls, there were real treasures though, tucked away in tiny rooms and easily overlooked.  These were not just the objects that affirmed power, nor were they all the creations of gifted artists… many were the small and practical things that had held a place in the lives and hearts of the castle’s people. Simple carved stones from the chapel of St Peter where a saint’s relics were housed. A lost key. Fragments of intricate metalwork going back to the Anglo-Saxon fort. And tiny, glowing specks of worked gold, smaller than a fingernail, bearing the serpentine design of the Bamburgh Beast.

In just the same way, you have to work to get beyond the layers of ego to see the spark of gold that lies, often unregarded, at the centre of every being. It may be buried so deep that it is impossible to see, but, like the castle, the ego is both sanctuary and prison for the treasure at its heart. 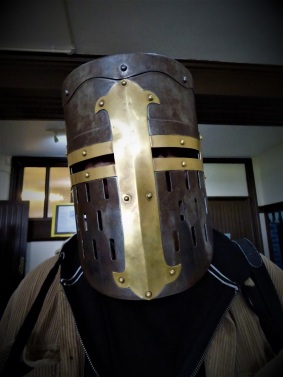 There was one more thing we had been asked to do and that was to find within the castle a place we had imagined from the beach below. We were almost ready to leave before I found mine and understood its personal significance. The great black-leaded range reminded me of the one in my great grandmother’s scullery, and so I left the ‘State Rooms’ with a fond smile for remembered warmth and the aroma of oven-bottom bread.

Anyone who wishes to have a virtual wander around the castle can visit their website for a 360° tour here. 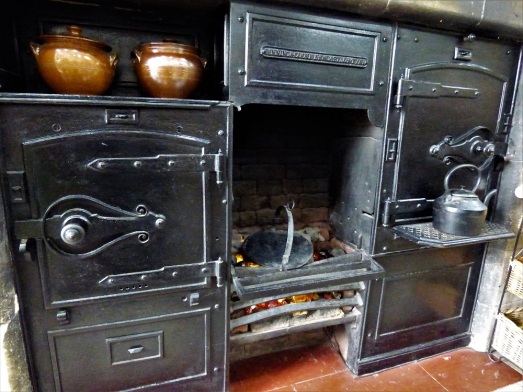