We walked back into Cerne Abbas for our final visit of the morning. The plan was that we would give a bit of a tour of the church, pointing out some of the more intriguing iconography and historical features before giving everyone time to explore for themselves. I also wanted to get a full set of photographs as it had been five years since our first visit. We have learned a lot in that time about these old churches and have a much better idea what to look for and I was bound to have missed many things of which we ought to have taken note. But the best laid plans of mice, men and serial church-crawlers and all that… It started well, but we got side-tracked.

We did manage to look at the carvings outside the church. They are strange, even for grotesques and gargoyles, being mainly comprised of giants with smaller figures. One theory suggests many of these types of figures represent sins…and a sin may indeed seem giant -sized to the repentant sinner in hope of reformation or in fear of hellfire. Be that as it may, these giants have a place only on the outside of the church… within, only spiritual stature counts. 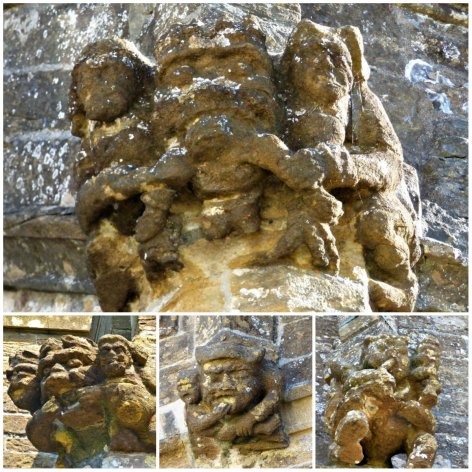 In many areas of ancient and religious art, there is a hierarchy of size; you often see gods, saints and kings portrayed as larger than those around them. Christianity is a religion where a Child holds the keys of heaven.

One curious carving beside the north porch, though is more utilitarian than symbolic. The open-mouthed face is a chimney outlet for a fireplace that warmed the toes of the incumbent priest, traces of which can still be seen within the church.

We entered the church and were soon side-tracked. As it turned out, between them, everyone found the most important bits of the church in the context of the workshop and we got to talk to artist John Coleman, better known as Ikon John. The artist uses archaic techniques and styles, painting with egg tempera and gold leaf to create ikons that continue an age-old tradition, and which have been commissioned by Catholic, Anglican, Orthodox, and Coptic churches and individuals. 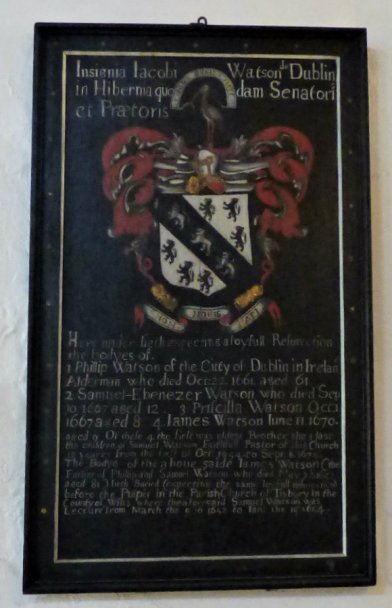 His work draws upon the symbolic language of images… a concept at the heart of our workshop… and it was a real gift to be able to speak with him. Not only did we learn a little about his work and the Cyrillic script used in ikon painting, he also told us of another large hillfort which is now on our ‘hit-list’ and about the burial of St Edwold… the hermit associated with the Silver Well. He even gave us the location of his final resting place, which we felt we ought to visit before heading north once more. 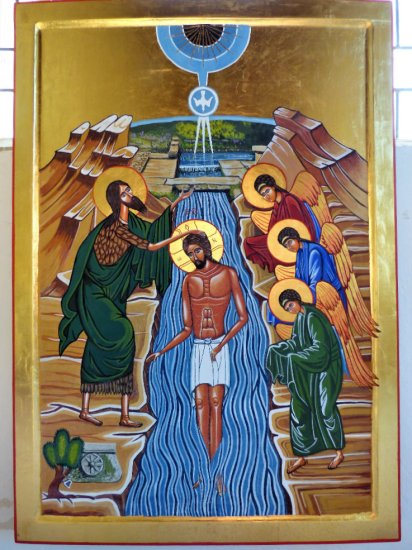 Meanwhile our companions had wandered round the church, discovering its details and secrets. The church of St Mary the Virgin belonged to the Abbey that cast its mantle over Cerne Abbas. When the Abbey was first founded, the people of the village came to the nave of its church to pray. Around 1300, the monks began building St Mary’s and its first vicar was installed in 1317.

Most of the fabric of the current building are 15th and 16th C, but traces of the original church remain in the chancel, where there are medieval wall paintings showing the Annunciation and scenes from the life and death of John the Baptist. 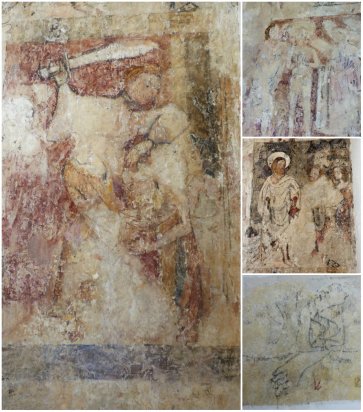 Most of the stained glass is either heraldic or comprises of small, individual panels set into clear windows. There is only one full stained-glass window, showing the Adoration of the Lamb from the Book of Revelation. 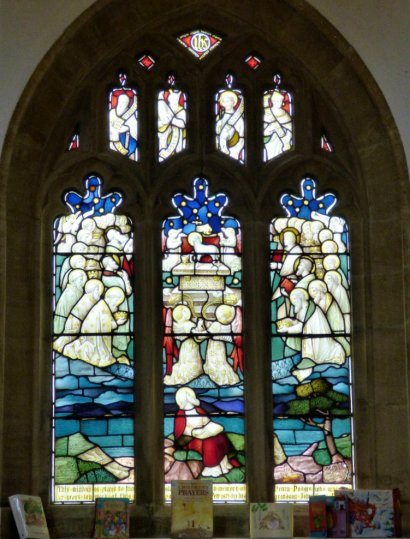 The oldest stained glass is a tiny fourteenth century panel, high up in the tracery, showing a rather solar lion. As one of the oldest local names for the Cerne Giant was reportedly Helis, and the giant once carried a lion-skin, this just adds fuel to the flame of mystery.

Plaques, most of the painted, commemorate local people from the past few hundred years of Cerne Abbas’ history. One mentions ‘William Cockeram, Gent and Practicioner of Phifick and Chirugery’ who died aged forty-three. Another pays tribute to members of the Notley family, early settlers to America, who owned the land now known as Capitol Hill, but once called Cerne Abbey Manor. 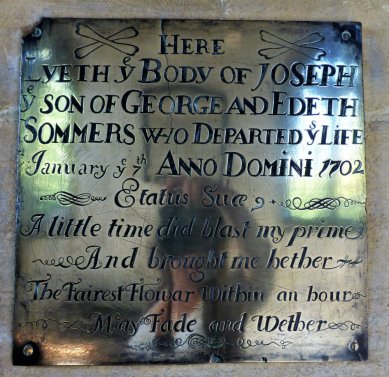 There are post-Reformation scripture panels painted on the walls of the nave; the Puritans banned all religious iconography and ‘abused images’ that smacked, to them, of superstition. The medieval wall paintings that once covered the walls of almost every church with colour and stories were destroyed or covered with plaster and paint. High above the chancel arch, a few traces of those earlier paintings can still be seen.

The arches of the arcade brought us back to geometry. They are of the gothic shape, formed from the interlocking circles of the vesica piscis, the figure that had been our initial inspiration for holding the workshop in the area. It is a shape often found in religious iconography, usually as an aureole around the figures of Christ and the Virgin. 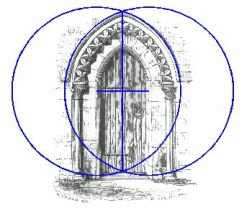 The most intriguing geometry though, is the so-called consecration cross. These were crosses, painted on plaster for the interior, usually with a candle sconce beneath them, or carved in stone for the exterior of a church. There would originally be twelve inside and twelve outside, marking the place where the presiding bishop anointed the building with holy oil during its consecration ceremony. Few survive the inevitable remodelling and repainting over the centuries, but occasionally, we stumble across one.

A consecration cross is supposed to be just that…a cross, often inscribed within a circle. Usually, a cross has four points… but not this one. It has six and looks much more like a flower or a star than a cross. Therefore, it is not a cross. We have seen these same symbols before, also described as consecration crosses, and simply accepted the name without question… which is the human default position when a trusted authority speaks. This time, a chance comment as I researched made me question.

A little further digging and it seems we are not alone in questioning the meaning of this daisy-wheel symbol, thought to date back to the thirteenth century. Oddly enough, this is the time when the Templars were active in the area…  and the examples we have previously seen of this symbol were in churches with Templar connections. But, regardless of the possible meanings and connections of this daisy-wheel ‘cross’, it was an interesting find in light of what we were going to be doing that afternoon… 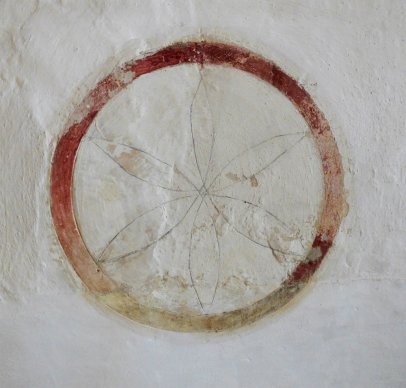 The Giant and the Sun: Patterns in the landscape was the Silent Eye summer workshop weekend. These informal events are held several times every year and are open to all. You do not have to be a member to join us as we wander the rich landscape of Britain, visiting ancient, sacred and intriguing places. We seek out myth and mystery, exploring what the land and its stories can teach us about our own daily lives and our place in the intricate tapestry of human Being.

After each event, we publish an account of the places we have visited and share a little of what we have discussed during the course of the weekend to give a taste of what we do.

If you would like to join us for a wander through the mysteries and history of Britain, please visit our Events page.

21 thoughts on “The Giant and the Sun – Ikonography”