He did not know how many were up there…

Centurion Calogerus stared at the edge of the plateau above him. The vast hill-fort rose from the chalk lands below in what appeared to be a series of grassy layers. There were no walls that he could see. This would be quick…

As the dawning sun of the year’s longest day crested the edge of the hill, he smiled in remembrance of his youth. This would have been his birthday; not the day he had come into the world but a new one given by those gentle people who raised him in that far-off province, before the strong and swift youth was snatched from the sea of death and forged into a fearsome Roman soldier.

Calogerus stared into the distance, again. There was a figure up there… A figure so distant that he should not have been able to make out any details, yet he could. It was a priest, he knew. How he knew, he didn’t know…

Below him, huddled in the strange and twisting entrance road, crouched eighty of his best men. Bisected by machines of death on wheels. They were not elite soldiers. They were auxiliaries, trained by their centurion in the arts of war and tactics. Tough and more loyal than he had any right to expect… Give them to Calogerus, they would say, extracting from battles and conquered tribes the best, the strongest, the ones with the bright eyes. He will turn them into Roman soldiers.

And he did… He took the dregs and made them into the best that the Legions of Aulus Plautius contained. The hero of Camulodunum commands us, they whispered, looking at their centurion. Our new master is no coward, hiding behind Roman finery.

And so, when the mighty Legion that was sweeping southern Britain grouped to move on, they used him and his dregs to create the opening, to breach the defences, to probe the weaknesses, and sometimes, to die… A foreigner and not high-born, he had risen slowly through the ranks. For a centurion, he was old.

Calogerus looked down at his men, waiting in readiness, and shifted his right hand to his sword’s pommel. Below, in the winding trench – deeper than six men and hollowed to a near-point, like a ‘V’ – the silence became something you could taste… Like iron on the tongue.

He looked up at the distant figure on the hill. For a moment he imagined he was that priest, looking down; then drew back from the act as an image flashed before his inner eye – the one he dared not talk about, when the soldiers drank and feasted and bled. In the image he was a figure in white, seen, not by the priest, but by the hill, itself. He shook himself out of the daydream and found he had been fingering the scar in the middle of his forehead. Too many echoes of his youth followed that thought and he blinked his eyes clear of visions, drawing his sword so that it sang in the morning air.

“Let the memories be gone, forever,” he hissed to the line of liquid green-gold forming on the curved horizon. “Let the light of this longest day wash it away…”

His sword was the signal, and the line moved forward. He followed on the top of the trench, probing the place’s secrets. He was sure there were many. The scholars spoke in hushed tones about this place. There were rumours that it was thousands of years old, but he didn’t believe that. It was just a big hill, and Roman soldiers were adept in the capture of such places. The Durotriges tribesmen – and women – up there were doomed.

The first shock came when he heard the laboured moaning from below. He stopped to survey the men in the still-dark trench. He could see the sheen of sweat on their bare shoulders, but the noise was not theirs. He peered into the gloom and drew a breath when he saw the bowed wheel of the cart. The angle of the hill, and lack of a flat path at the bottom, was placing strain on the bearing and axle; the heavy weapons on board were doing the rest.

No fools the builders of this hill, he thought. But, no sooner had the admiration registered than there came the crack of breaking timber and one of the carts toppled sideways, pinning screaming soldiers beneath it. In seconds, their comrades came to the rescue, but several were injured.

The centurion uttered a curse before shouting, “Leave it! Ensure the rest of the wagons are forced level. Forward with weapons drawn!”

The loss of one-third of their armaments would weaken their strength, but the biggest cart remained – and it carried the largest punch. But progress was slow, and bore a weariness he did not understand…

The scouts had said that the gate with the twin towers lay dead ahead, but the centurion had to curse again as the path his men were following – with their heavy loads – turned abruptly left. There was a light path over the top, but the weapon carts would never get up its steep bank. His stomach turned over as he realised the complexity of these defences. Primitive tribes? Calogerus shook his head.

He had no choice but to carry on. They had not been challenged so far. For all they knew the tribe above them were unaware of this dawn attack. 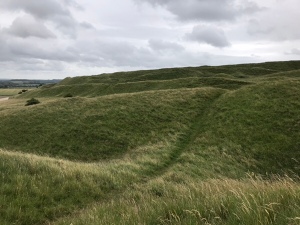 They marched for far too long before the trench turned, again, seeming to snake back on itself toward the point on the hillside where they had entered the site. Here, the walls of the trench were even higher. The wailing noise stung his ears like the feeling of severe pain – as with a deep wound, where the flow of blood is not immediately seen. The centurion spun round, trying to locate the source. His men, far below, were also turning in panic – and he could see that they were becoming more faint in the trench’s gloom.

Calogerus stared at the madness. As far as he could see, his men were not being attacked, and yet they had begun to stagger around, as though injured – or drunk…

The baleful wailing had hidden the other, more subtle invader. The burning grass – the dreaming grass – the clouds of mist were clouds of smoke, washing over the men at the bottom of the trench… And then came a sound like the strike of a hawk and the ground began to shift under the centurion and he fell, rolling down the slopes as the trench walls came alive with snakes. A rough blow with a blunt weapon robbed him of vision and sense…

He woke to the sight of the gates – a prisoner on their own munitions cart approaching the thick wooden door as it cranked open on its chains. He could see, straight away, that the scouts had been wrong; that the twin towers, separated by the earthen bank, would be much harder to attack. Even here, the paths were curved… Such clever defences.

The voice walking behind him was gentle. “Only three of your men are dead,” the priestess said, holding a cup of soaked herbs to his parched lips. We only killed those we had to… the rest were encouraged to flee.”

He tried to sit up, but leather bonds held him fast. “Don’t struggle,” she said. “Your choices are few, but you are alive.”

“Better dead, than this disgrace…” His parched throat rasped the words. She gave him more to drink.

“In a military world, yes,” she said. “But the mark on your head tells the story of another world that once claimed you. She pulled him around and he beheld great beauty and calm eyes that spoke more deeply than he knew how.

“We are both doomed,” the priestess said. “I am not foolish enough to believe otherwise. In days…months at the most, the legion will return and its vengeance will be bloody and swift – and our tricks with paths that curve and the dream smoke will not prevail.” 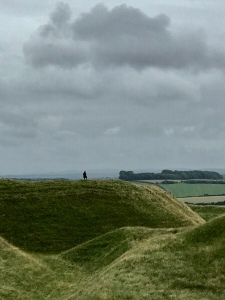 He struggled to rise, again, and this time she helped him, slicing her knife through the bindings at his wrists, but leaving those around his ankles. “For now,” she said.

“They will kill me, anyway,” he said, knowing that his life had reached its end.

As the sun set on the day of the rebirth of his spirit, they held hands on the top of the plateau and faced the west, bathing in the red gold of the longest day’s passing. For now, and briefly, they could be timeless.

The armies of Aulus Plautius were not before them… but they would come, soon enough, as one civilisation died and another – younger, hungrier and more deadly, drank its blood.

Other parts of the Dorset series:

Stuart France’s “Church Crawl”, “Magical Elements”, “The Dance of Fire and Water”, “Gateway”, posts which are related background and description of the Dorset workshop…

This work of fiction is set in the real landscape of Maiden Castle, an Iron Age fort near Dorchester, Dorset. The details of the fort’s defences are real, as can be seen from the photographs. The Durotriges are known to have used psychotropic substances to enhance their rituals, and may well have employed all manner of attack in their complex defences – which are as described.

The visit to Maiden Castle was the last part of the Silent Eye’s pre-solstice weekend, June 2018. For details of the work of the Silent Eye School of Consciousness, and other ‘in the landscape’ workshops, click the link below.

Stephen Tanham is a director of the Silent Eye School of Consciousness, a not-for-profit organisation that helps people find the reality and essence of their existence via home-based, practical courses which are low-cost and personally supervised by email.

His personal blog, Sun in Gemini, is at stevetanham.wordpress.com.