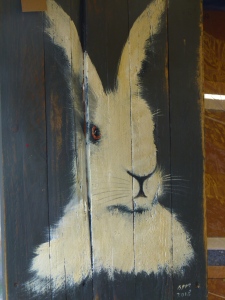 For those with eyes to see…

Altar, placed centrally on chequered floor and covered… With, placed on it, top-hat, upended, with, placed in it, rabbit mask and ears x2, and ‘pack-of-cards’, all also covered. South and North lined with nine chairs for Companions.  Adjudicator 1 (male) to sit on central chair of South. Adjudicator 2 (female) to sit on central chair of North. Two chairs in East. One chair in West.

Bugs and Cara initially sit on chairs in East. When all Companions have entered and are seated Cara and Bugs rise to stand, simultaneously, and Cara walks clockwise to stand in front of the west chair.

Bugs: Friends, Britons, Countrymen…Welcome to our presentation. In keeping with our Shakespearean theme this year, we have determined to develop some of the concepts of the weekend…

(Bugs and Cara walk anti-clockwise. Bugs to stand before West chair. Cara to stand before East chairs. On the way, Bugs hands Adjudicator 2 Gold Parchment with a sonnet printed on it. On reaching the West Bugs declares…)

Cara:  recites the Shakespearean sonnet as a ‘lover’…

Being your slave, what should I do but tend

Upon the hours and times of your desire?

I have no precious time at all to spend,

Nor services to do, till you require.

Nor dare I chide the world-without-end hour

Whilst I, my sovereign, watch the clock for you,

Nor think the bitterness of absence sour

When you have bid your servant once adieu;

Nor dare I question with my jealous thought

Where you may be, or your affairs suppose,

But, like a sad slave, stay and think of nought

Save, where you are how happy you make those.

So true a fool is love that in your will,

Though you do anything, he thinks no ill.

(Adjudicator 2 ‘follows’ the recital from the Gold Parchment. On finishing the reading Cara and Bugs switch positions again but this time they move clockwise. On the way Cara hands Adjudicator 1 Silver Parchment with the sonnet printed on it. On reaching the East, Bugs declares…)

Cara: recites the same Shakespearean sonnet but this time as a ‘loather’…

(Adjudicator 1 ‘follows’ the recital from the Silver Parchment. On finishing the reading Cara moves clockwise to the South to collect Adjudicator 1 and leads him to the central altar. Bugs moves clockwise to the North to collect Adjudicator 2 and leads her to the central altar. Both Adjudicators follow the central line of the ‘board’ and square corners around the altar, to stand facing each other centrally as directed by Bugs and Cara. Once at the altar they are asked to verify that both the scripts are the same. When they have done so they swap parchments and then are led to opposite seats and re-seated.)

(During the following exchange they circle the altar, alternating between East and West as they speak.)

Bugs: Ladies and Gentlemen, please, a hand for our adjudicators…

Cara: And so, we see, that, Horizontal Polarities are interchangeable, and represent two sides of the same coin…

And we can also see, that, opposite ‘emotions’ can be evoked by the self-same words?

Cara: But if we cannot trust the written word what can we trust?

13 thoughts on “WHAT’S UP DOC? Lines of communication…”