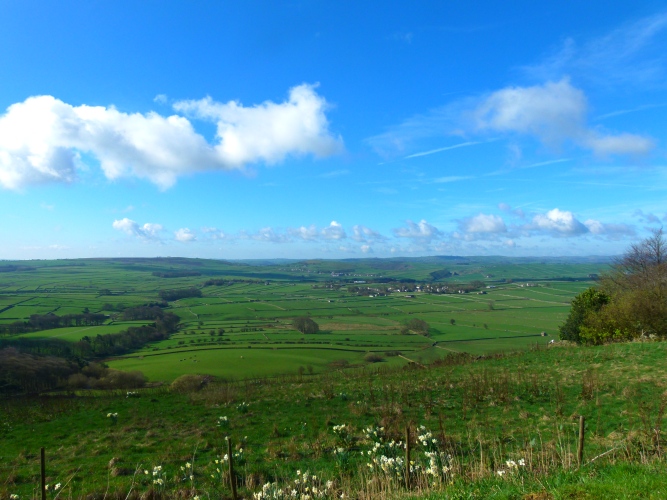 The Silent Eye is busy gearing up for the annual April workshop. Every year we host a residential workshop weekend in Derbyshire and every year people come from across the globe to join us for an adventure of mind, heart and spirit.

Past events have seen us travel through time from the far distant past to the unwritten future. The weekends are a frame for spiritual exploration, the costumes and colour bring the stories to life, while the scripted ritual drama engages the imagination and emotions, allowing us to learn from a shared experience.

Inevitably, these weekends have their ‘best bits’… the memorable moments that stand out from the rest. Such moments are largely subjective and doubtless everyone has their own, although the warm, friendship and laughter are a common thread.

Some of the highlights from the April workshops stand out not just as ‘workshop memories’, but as very special moments in my own life. I will not forget the opening of our very first ritual weekend, The Song of the Troubadour, when Steve and I sang the song written for that moment. Steve can sing…I cannot… yet together we harmonised. My unreliable voice soared, proving that limitations can be swept away, as we were carried on the wave of energy and emotion that lit up the temple.

I will not forget the shamanic drumming that opened each of the remaining rituals that weekend, nor the Child who sat at the centre of the sound, radiating peace. Nor the embrace given and received by the Mother, a moment of simplicity so beautiful I never thought it could be surpassed…until the Vigil.

At four in the morning, I took my place in the silent temple. An hour later, I was joined by Steve and then Stuart, the three of us forming an arrow of intent. We hoped a few would join us in stillness before dawn as we brought the Silent Eye into being. We never expected that every one of our Companions that weekend would be there, at that unearthly hour, to offer their gifts and support for the birth of the school. That was unforgettable.

Next came Land of the Exiles, where an interstellar craft

touched down on a sentient planet and the crew sought to teach humanity and empathy to the mechanical mind that had taken charge of their ship. It is the hillside ritual that stands out for me most, and the parts of it I did not see, but heard of later. Gold winged, gold crowned and followed by a green Osiris, as Isis I waited on the dew-drenched hill for Anubis to bring the Companions to witness the dawn.

The wrappings of the mummified and near-hypothermic Osiris, were created with rope…and almost caused an accident when an early motorist caught sight of me tying up the green and white Osiris on the hillside… and steered his vehicle into the hedge.

Meanwhile, jackal-headed Anubis stalked the corridors, knocking on the doors of the Companions to collect them. I heard about that later… few were expecting that figure when they opened their doors and the reactions of some have become legendary.

I can attest to what a huge and surprising figure Anubis made that morning. I had left my room for a moment to prepare the temple… and returned to find the Jackal standing there, looking about eight feet tall and filling the space with his presence. Even though I had helped make the costume and done the ‘god’s’ make-up in the pre-dawn light, it was a startling sight…and I knew what to expect! 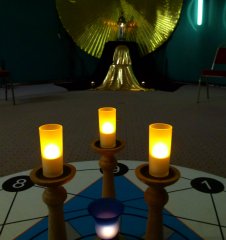 On a more serious note, what stands out in memory is a chant within a ritual and the cathartic journey of our Sekhmet, whose character grew from vulnerability to strength. What is played out in ritual changes nothing, though it may set the wheels of change in motion. When what is played out in ritual with intent is carried out into the world and acted upon in full consciousness, change and growth are inevitable…and beautiful.

In River of the Sun, we revisited ancient Egypt, this time following Rameses and his mentor, Menascare as the young pharaoh came into his power. Although the pharaoh’s nemyss appeared to have a life of its own, and Menascare, who was doubling as tech, had an iPad strapped to his staff to allow him to control the music, there were moments of great beauty, especially when once again, the written role of the young priest echoed the personal journey of its player. Such moments are not written with foreknowledge… though we knew there was only one person for that role once it was written. These moments are gifts. The Cave of the Seers was another gift, for many reasons, when a Presence other than our own filled the vessel we had crafted.

Leaf and Flame, based upon the tale of Sir Gawain and the Green Knight, was memorable for a number of reasons, not least of which were the props and ‘special effects’ we had to come up with. It is not easy to behead a giant… even less so when he then has to pick up his head and walk away, offering the severed head to the assembled company and asking them to ‘pick a card, any card…’ from it.

We managed… with shadow play, Halloween props and a masked head. Granted, the bouncing of the ‘head’ as it fell caused some mirth in the temple as I dropped the football just a little too late… but on the hole, it worked well. The totem animal cards that were picked out by each of the Companions were uncannily pertinent too…

Mordred and Morgause making wagers over a gameboard… the temptation of Gawain and the ad-libbing of the temptress’ husband… the hunt in the green forest… the wedding of Gawain and Lady Ragnell, it is hard to pick a ‘favourite’. The most powerful moment though was one of sheer panic… you invoke Pan at your peril, and although we had not consciously made the connection at that point between Pan and the Green Man, the panic set in, affecting the most seasoned ritualists at one point… then that energy exploded in another way as Gawain was preparing to meet the Green Knight for the return blow.

We also had the Foxes and their fire dance that year… and a very special moment indeed as we led their procession into the arena.

After the prop-heavy Leaf and Flame, the Feathered Seer weekend was kept deliberately simple, returning to a more traditional ritual style and delving into the teachings of the Silent Eye. The story followed a young seer as she sought to preserve the wisdom of her people from marauders and brought the ancient and sacred landscape into the temple. It was unusual in that Stuart and I spent most of the weekend dead… representing the ancestors and the unseen presence that guides. 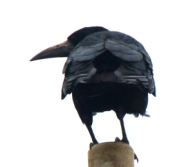 One of the greatest gifts of that weekend was the attention that everyone brought to the moment. When our shaman opened the temple, the energy levels rose. When the Companions walked the pattern of the enneagram, they did so with a grace and flow that was beautiful to witness. When both patience and silence were required, both were given in full measure. When our Lore Keepers acted out the tale we asked them to share, they did so with a flair, flamboyance and energy unlike anything you can imagine. The other highlights are less easy to convey; the emotion as fear was symbolically faced and dissolved, the work of the temple that was sent out into the world… and the innumerable synchronicities that let us know we were not working alone.

This year, with The Jewel in the Claw, we step back in time to the moments before Shakespeare’s demise. He takes us to the court of Queen Elizabeth I of England where political intrigue is rife, and a queen holds a vision for the future of her realm. As April approaches, I wonder what new memories we will forge? 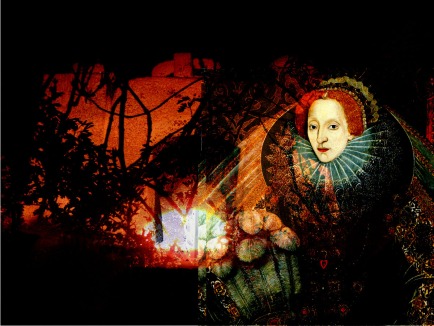 19 thoughts on “Looking back…”