Traditional initiation ceremonies tend to follow a roughly similar outline. The initiand is put through a series of symbolic trials, including the acceptance of mortality, each designed to test resolve and dedication, before symbolically ‘dying’ to their old self and being ‘reborn’ into the new. The landscape of Rowtor Rocks lends itself perfectly to the traditional scenario and, as part of the workshop, we demonstrated this by walking through a mock initiation ceremony. We cannot say that we reproduced what did take place, but the symbolism of the landscape dictated the form and it worked perfectly to demonstrate what could have taken place there.

The candidate is first led past the Guardian’s seat… to a rock shaped like a skull, into the top of which a square font has been cut. There is a sheltered ledge cut into the rock close by where they could wait to be called… or upon which they could be laid as if in a tomb.  Through a portal built of cut stone, the land opens out onto a level area that contains three caves. The first and largest is natural, but contains twin Columns that were added by masons. In many traditions, and particularly in Masonic traditions, the twin Columns of the Temple of Solomon, Boaz and Jachin, are remembered.

At the far end of the plateau is the smallest cavern, with a low entrance that requires a bowing of the head. It is a perfect antechamber and a low wall in front of it would make it possible for a blindfolded candidate to exit safely, without falling down the sheer cliff in front of it, ready to be led to the central cave, known as the Condemned Man’s Cell which is also a ‘birthing chamber’.

The entrance to the cave is narrow and distinctly feminine in shape. Once inside, there is only blackness and echoes. A little light shows an alcove, in which the acoustics are exceptional; chant in that alcove and the sound vibrates through every pore of rock, bone and flesh. There is a single, small hole drilled through the outer wall of the cave… and one can imagine the spiritual and symbolic effect of seeing a point of light in the blackness.

The cave can be seen as both tomb and womb, as birth and death are but the two sides of a single coin, and each contains the other. From the Cell, there is a steep, narrow staircase of boulders to climb, also very feminine, and the initiand emerges, reborn, into the light. The steps are difficult…it takes a ‘leap of faith’ to ascend, and as faith can move mountains, so the initiand, coming into his inner strength, can move the great ovoid rocking stone that awaits. 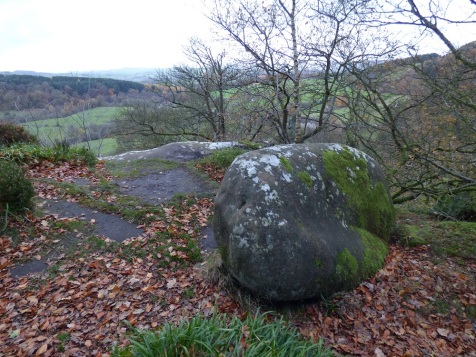 From here, there is a choice of path to reach a goal only glimpsed from below… the Broken Column. When they have chosen, they arrive at a sheltered bench. Were the ceremony to take place just before dawn, from this spot they would watch the sun rise in splendour over the octagonal turret of the church. Stepping forward and turning, they would find themselves beneath the Broken Column. Steps lead up onto the highest level of the rocks, yet do not allow access to the Column which seems held in a mighty hand. In Masonic tradition, the Broken Column represents Hiram Abiff, the murdered architect of the Temple of Solomon, as well as the unfinished work of the Temple itself. The symbol is explained as part of the ritual of the Master Masons degree. In Qabalistic terms, a tradition in which we ourselves were trained, the Broken Column represents the Middle Pillar on the Tree of Life, which joins the earthly realm to the perfect Unity of the divine. Between them is the point of Christ-consciousness…Beauty… and beyond that point, it is said that no man can go until they cross the Abyss. This concept too may be represented as a broken column. 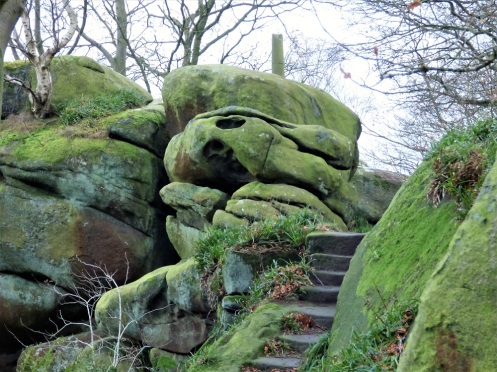 Our initiand, then, standing beneath the great hand of stone in which rests the Broken Pillar, is asked, ‘Can you grasp the Beyond?’. And they try, finding the hidden pathway, climbing to the next level…yet still unable to touch the Column that stands separate from the rest.

At the base of the pillar an inverted pentagram has been carved into the rock. This is usually seen as a symbol of Baphomet… a name associated with both Templars and Freemasons and erroneous accusations of ‘devil worship’ within those organisations. The popular modern image of Baphomet as a satanic figure differs greatly from the medieval image. During the Templar trials, when ‘confessions’ were tortured from the victims, the Baphomet  was described variously as an idol with a human skull, a head with two faces or a bearded head…and at least two of those are Qabalistic symbols for divinity. Stuart reminded us that there is a cipher by which Baphomet is transformed into Sophia…Wisdom… and it would indeed take Wisdom to cross the Abyss and approach Unity. 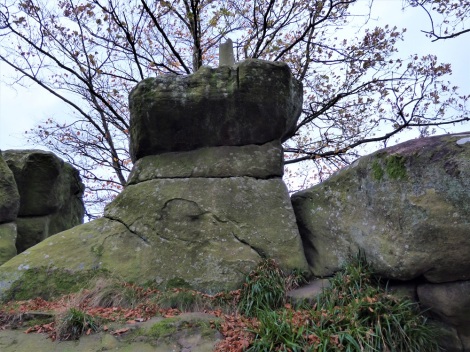 For the initiand, one can imagine the scenario. The trials of fear and uncertainty, the reward of the inner strength to ‘move mountains’ and the glow of the sunrise… and after all that, he is reminded that no matter how high he may rise, he must always remain humble as there is always an Unreachable Height.

The final act of our mock initiation took place before the seat of judgement. There are three seats carved together in the rock and they are a lesson in themselves to anyone wishing to occupy them. Coincidentally, three Master Masons constitute a Master’s Lodge. To ascend to these seats, because of their size and construction, you must either kneel and show humility…or show wisdom and walk along the top of the rock. From here, the initiand may look out across the land to where the sun sets… and down on a prehistoric solar symbol that seems to encapsulate far more than we understand.

Was this what was happening at Rowtor Rocks?  Were the legends of Druids there really based on hushed memories of something like the scenario we had created? Could Thomas Eyre have been involved in something other than orthodox church business? We may never know…. But something was going on in the hidden history of the area and the clues kept on coming…

14 thoughts on “Riddles of the Night: The Temple of Hewn Stone II”