We took our time getting organised, intending to take a leisurely drive cross-country… perhaps stopping along the way, wherever the spirit moved us. In the spirit of the planned walk-and-talk weekend, the prisoners had escaped and were heading for the border. Anyone would think we were on holiday. We did ourselves. We should know better by now.

We may not have been heading for our respective places of work, but the Work that we do  when we are not at work…and even when we are… is not something that can be switched on and off. It cannot be neatly compartmentalised or assigned a designated slot on the timetable, to be dipped into when the fancy takes you; it is a state of being, not doing. Once a pinhole has been opened in consciousness, the pressure of life floods through in an unceasing current.

The problem is that the conscious mind is rather dense. It seems to forget, from moment to moment, that the flow is constant, even if our attention is elsewhere. Which is why the discrete presence plucking at your sleeve may go unnoticed until it sighs, gives up and hits you round the face with a wet kipper.

The first clue that we missed was my apparent reluctance to break our journey at a place we actually want to visit. I came up with no good reason and we sailed blithely by, choosing instead to take the coast road, rather than the more practical route to our destination. There was little to see for some reason. Nothing that caught our interest or eye apart from an odd glimpse of the sea and some rather spectacular castles perched on hillsides, where we could not even stop to take the odd picture.

Consequently, we had not actually broken the journey to Llandudno at all and arrived a bit deflated at our destination. There was a half seen glimpse of a sculpture as we sought the guest house where we would be staying the night, a flurry of activity to get booked in and settled,  then a rather half-hearted decision to go out and find dinner and check out the sculpture.

“It looked like the White Rabbit.”
“Odd, that, because this hotel feels a lot like the Alice-in Wonderland hotel in Cumbria…” That had been the Lutwidge Arms… a strange place with Alice on the ceiling; a last minute discovery on our wander up to Scotland… a trip that had set us off on a whole new phase of adventuring.
I glanced at the pictures on the hotel wall as I opened the door… and there was Alice.
“There must be some connection with Alice and Llandudno…”

We can, I think, be excused at this point. We were tired and the only wet fish we had on our minds came with batter, chips and mushy peas. The word ‘rabbit-hole’ would have had nothing to connect with anyway… The only entry to the earth we had encountered in ages was my accidental glimpse of Thor’s Cave. 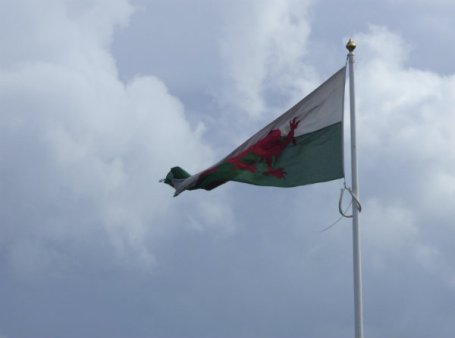 We sat on the promenade for a while, beneath the fluttering Red Dragon, watching the sea and the flock of corvids who came to investigate… they too were probably ready for dinner.
“Shall we take a reading?”
At the informal weekends we ask our companions to bring readings that speak to them or capture the theme of the event. We had taken a slightly different approach this time and brought a book of mystical quotations that would be used following the old pronciple of bibliomancy. The pages, chosen at random but with intent, would hold a pair of readings. One of these would be selected numerically to represent the light, the other would be the shadow side.
“The light reading is what can be seen in a given situation, the dark is what has to be intuited.”

Obviously intuition had already called it a day. We wandered back to the hotel, with its view of the Great Orme to the rear and the Little Orme to the front.
“Orme – worm – wyrm… It’s a dragon.”
“There are ancient mines on the summit…”
“We could have a wander up there before we leave…”

So, although the intuition wasn’t filtering through to consciousness just yet and we had managed to ignore the sleeve-tugging and even failed to register the wet kipper, we were, it seemed, finally getting there. So next morning, after breakfast, we threw the bags in the car and climbed the steep road up the Great Orme…

11 thoughts on “The Wyrm and the Wyrd: Getting there…”