Alethea Kehas and Barbara Walsh holding a photograph of Obi.

For those Companions who study the Silent Eye Correspondence Course the Sunday morning of our April Workshop is a special time.

It is then that we mark their progress through the three degrees of the course with a ceremony designed to ratify each stage of that process.

Not all who reach the Portal will pass the Threshold.

Not all who knock will see that door held open to the Light.

Initiation cannot be bought, nor can it be earned through effort.

It is not a goal, but a beginning.

It is a recognition of the soul and symbol of the contract between the Initiate and the Inner Light.

It comes not as a reward, but as a Grace.’

We would like to thank all those who attended the April Workshop this year.

As an indication of the calibre of our attendees for, ‘The Feathered Seer’ we need only consider, that the early Saturday morning, ‘Greeting the Dawn’ ritual which has always been an optional event, drew a full complement of Companions!

With heartfelt thanks to Allan Pringle and Morgana West who delivered such relevant and inspiring presentations for us.

Finally, we would like to end with a special mention for ‘Our Shaman’… 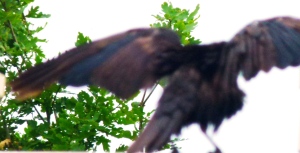 4 thoughts on “Flight of the Seer VI…”