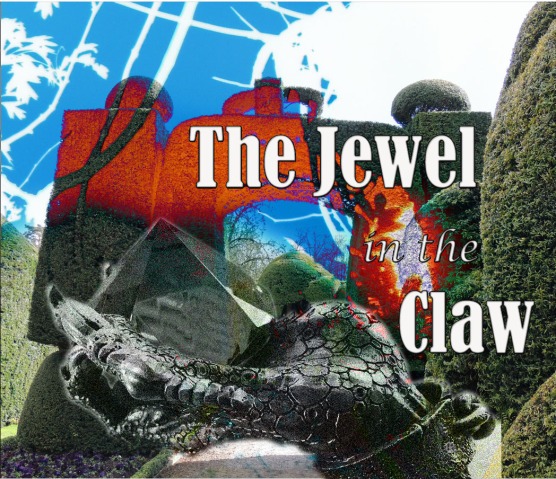 Four faces of a Elizabethan jewel that will become Britain… and one deadly enemy – hidden deep in the inner workings of an age.

1586, and our story begins… The reign of Elizabeth I, the ‘Virgin Queen’ of the house of Tudor.

A time when England stood virtually alone amongst its neighbours, surrounded by hostile political and religious forces set in motion by the reign of Elizabeth’s father Henry VIII. A plot has just been discovered to assassinate the now-established Queen of England and Ireland. The man who uncovered it is Francis Walsingham, her celebrated and loyal spymaster, who is intent on establishing a network of agents outside and inside England to protect her.

By the 1580s, this small island, with its ‘virgin’ Queen, had become a hotbed of intellectual and magical insight, with leading thinkers, such as the Queen’s astrologer, John Dee, driving forward the knowledge of the age under the banner of what we now call alchemy… and at the same time producing the world’s first standard work on international navigation – a true scientist, and a man hard to evaluate by today’s coldly judgmental standards… But, in our story, his devotion to Elizabeth is never in doubt.

None of this ‘magic’ is seen to be at odds with religion – it is seen as the science of the day. Dr John Dee’s most passionate work is developing a system whereby he may communicate with angels. The greater problem is that the religion of England – bequeathed by Henry – is Protestant; and most of England’s neighbours are strongly Catholic. Elizabeth has been excommunicated by the Pope, and it is open season on her life by any who wish to gain his favour…

The Jewel in the Claw, our story for the 2018 Spring Weekend, is told in five ritual dramas, from Friday night to Sunday morning, and weaves a fictional but historically-set tale of a conspiracy to destabilise the Queen’s power and re-align England, religiously and politically, with mainland Europe. At the heart of this dark strategy is the use of Dr John Dee as a pawn in a much larger battle of will, wits and magic.

Our ritual dramas will follow a trail of intrigue outwards from the tumultuous relationship between Elizabeth, her senior ministers and the helpless Dr John Dee, trapped in the flames of engineered disrepute.

The whole drama is told through the memories of the leading playwright of the age. England is portrayed as a microcosm of what is happening in the expanding world of the sixteenth century, where religion, science and politics vie for control of the future.

Only change is inevitable… and change has its own magic in the way it unfolds.

Through all of this, gentle John Dee is revealed as a most resourceful man of learning, reluctantly using his skills as strategist to supplement his alchemical knowledge of man’s relationship with the divine. Around them are such famous figures as Sir Francis Drake and Sir Walter Raleigh, real figures from history who masterminded the defence of the realm and the eventual expansion of empire. There are others, many others, such as Philip Sidney and Fulke Greville, some of them close to the Queen’s heart… but can she afford to be so open with those who may have darker motives? And then there is Robert Devereux, second Earl of Essex, favourite of the Queen and growing in power by the day…

Discerning the truth is becoming harder and harder… in a startling parallel with today.

In a little-known but key part of England’s history, the Queen reaches out to the Islamic world – for trade and alliances, seeking to build a political wall of power against the might of Catholic Spain. London hosts the first ever visit of an Islamic ambassador, Al-Anouri, and Shakespeare writes Othello, telling the tragic story of the Moor… But will any of this help the Virgin Queen to survive a hostile world? If anyone in history spent a life on the brink of extermination, it was Elizabeth I.

Can we put ourselves into the mind of that age?

There are always two threads to these workshops – one temporal, one spiritual. This time, the inner theme will be the spiritual and psychological exploration of what is means to be truly vulnerable, and the importance of that state to the evolving human soul. England emerged from the Tudor era to view it, in hindsight, as a Golden Age. But the stories of many of those closest to the Queen describe a struggle involving considerable personal sacrifice.

Although we will be using historically accurate settings, with their religious perspectives, our purpose is to show the inherent magic in mankind’s potential for self-transformation, regardless of nationality, race or religious beliefs.

The Jewel in the Claw is the Silent Eye’s spring workshop for 2018, weekend of April 20-22. We will be returning to the lovely Nightingale Centre, in the heart of the Derbyshire hills and dales, for our celebrated rites of Spring.

There is already considerable interest in the workshop so please book early to reserve your place. All you need to do is register your interest at this stage: send us an email to Rivingtide@gmail.com. Use the words ‘Jewel in the Claw’ in your subject header and we’ll get back to you with more information.