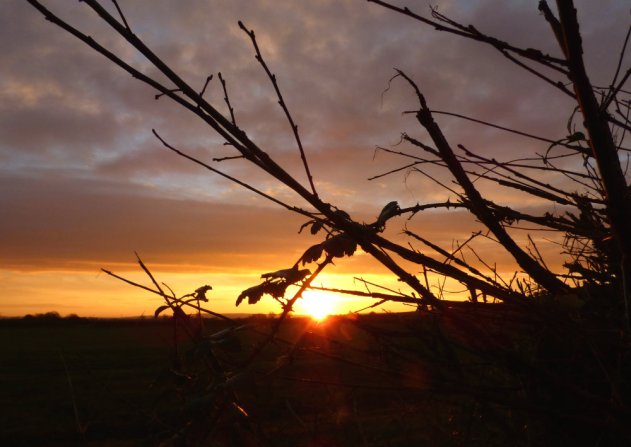 As the opening gambit to a conversation between mother and son, it was, I admit, guaranteed to get my attention. He didn’t sound particularly cheerless. In fact, if anything, he sounded quite excited by the idea. I was obviously missing something here.

He explained. An evening in front of the TV was responsible.

“It’s just mindless entertainment. It is like being  dead… ” I didn’t think TV had become that bad…but then, I never watch it. “I am just moving from moment to moment,” he said, “watching an illusion on the screen. It is only when something sparks a train of thought and I pick up the phone to talk to you about it, that I wake up… I’m alive again. Then, when I put the phone down and go back to the TV, I go back to sleep.” Ah. I understood. “Its scary.”

We had been talking about how much of our lives are spent running on autopilot. Quite apart from the myriad bodily functions that are set to maintain themselves automatically, there are many things we do every day without paying the slightest heed to them. The drive we don’t register because it is too familiar… the chores we do without thinking… It is a useful skill in some ways, freeing the mind from directing a well-learned behaviour and allowing it to occupy itself with other things, but the danger is the same as with any other narcotic… it is easy to fall into a mindless dependency, instead of using the free space in attention for something more interesting.

Many writers, for example, deliberately take advantage of this free space. Agatha Christie is famously quoted as saying that the best time for planning a book is while doing the dishes. For those who make a conscious choice to benefit from this ability to work on autopilot, it is a time to multitask. For some, it is a time to clear the mind and rest within an inner stillness…  for yet others it is a time of enhanced attention, where the mind is free to roam unexplored pathways.

My son drew the comparison between the state of enhanced awareness achieved by paying attention, using modern techniques of mindfulness, and the mindless and vicarious witnessing of life through the TV screen. He was shocked by the disparity in the quality of life experience. Eating a small piece of chocolate with focussed intention and awareness, for example, is more fulfilling and far richer than simply gazing at a screen to fill the time.

It is not that TV is a bad thing. Like most human inventions, it is a double-edged sword that must be handled with care. Watching TV is a great way to relax and unwind at the end of a busy day. It can be informative and educational. It can make you think… leading to sparkling or intimate debates on the nature of life, the universe and everything, with answers far more fascinating than the enigmatic’forty-two‘. But it can become a soporific drug that eliminates the need or even the desire to think and a direct barrier to communication. The TV is not at fault… not even the programmes… the choice lies within.

One of the first exercises I ever taught was about imagining an experience, creating it from nothing in the mind, while drawing upon remembered sensation. One of the earliest exercises in the Silent Eye course looks at familiar objects which, seen with full attention, reveal themselves in a whole new light. The level of attention that we bring to even the simplest tasks can, quite literally, change how we perceive and experience the world.

When I woke this morning, it was to a dew-drenched dawn. I opened the garden door for the dog and simply stood for a while, drinking in the moment. Long shadows cast by a newly-risen sun dappled the garden with strange shapes. Rainbows danced on every blade of grass and the air was alive with birdsong. The freshness in the air heralded warmth to come and the fragrance of spring was unmistakable and the dog, released from her nightly ‘imprisonment’ on the sofa, dived out into the dew, scattering light with every joyful bound of her paws. I could sleep longer, wake later and choose to miss this daily miracle. I could just open the door and fail to see it, heading for the kitchen and the kettle and letting the tasks of the day claim my attention… but that would be such a waste of life.

“Yeah,” said my son. “It is the difference between just doing and being….”