In the Valley of Birds was consternation.

All the birds had met there to choose a king but none could agree on which of their number it should be.

Eventually they asked Night Owl to devise a game to help them decide.

It was sunrise before Night Owl finished formulating his game plan and was ready to convey it to the rest of the birds.

‘Whoever flies highest in the sky will be king of the birds,’ he hooted, then he rolled his eyes into the top of his skull and fell asleep.

Golden Eagle immediately started to preen his honey coloured feathers and then he spread his wings to their fullest extent.

‘Where will my coronation be,’ he asked somewhat presumptuously?

‘How do you know you’ll win,’ squawked Raven contemptuously?

‘Of course I shall win,’ said Golden Eagle, ‘for I am the biggest, the strongest, and the swiftest of all the birds, and I am also the most handsome,’ he added and then he preened his honey coloured wing feathers some more.

‘To be a good king,’ cackled Magpie, ‘one has to be more than big, strong and handsome.’

‘A good king is also wise, kind and sensitive to the needs of others,’ twittered Sparrow.

‘You’ll see,’ said Golden Eagle all the more insistently, ‘I will win… I will win.’

Night Owl woke up and surveyed the assembled feathered-folk with his dish like eyes, ‘remember,’ he hooted sagely, ‘this is not a competition nor is it a race, it is a game to find out who can fly highest in the sky.’

‘Let’s be off… oh, do let’s be off,’ chattered Starling impatiently.

‘On the count of three then,’ said Night Owl calmly, ‘Ready…steady, go…’

With a sound like a thousand and one pairs of gloved hands clapping the flock of birds took off together and flew up from the earth and into the sky.

Night Owl, who had no desire to be king, stayed where he was in his tree and craned his eyes into the sky so that he could better see.

Not that he really needed to he already knew who would fly the highest.

Golden Eagle beat his powerful wings and quickly rose higher and higher in the sky.

After a little while he looked down and saw all the other birds a long way below him.

‘This is easy,’ thought Golden Eagle, ‘‘they’ll never catch me now,’ and continuing to soar ever higher into the sky, he concluded to himself, ‘I am going to win.’

When Golden Eagle next looked down he noticed that only Grey-Backed Seagull was still trying to catch up to him. So he beat his wings faster and more powerfully and soon even Grey-Backed Seagull lost heart and began to drift out of sight far below him.

Upon seeing this Golden Eagle became very excited, ‘I’ve won, I’ve won,’ he thought, ‘I will be crowned king of the birds,’ and then he began to slowly glide back down to earth.

Just then he felt something moving in the feathers of his mantle and then a thin, small voice said, ‘Why, thank you for the lift Golden Eagle.’

Looking back over his shoulder Golden Eagle now saw Wren flying above him.

Golden Eagle became angry and tried to beat his wings again more vigorously but by now he was very tired and he could only flap them weakly as Wren continued to fly higher and higher until he was only a tiny speck in the sky.

Golden Eagle sped back down to earth and landed with outstretched wings, his long talons gripping the ground in fury, ‘Not fair!’ he cried, ‘Wren hitched a ride!’

Then he snapped his wings together and fixed Night Owl with a piercing stare, ‘Tell him that’s not fair!’

By this time Wren too had returned to earth and was flitting and bouncing about in the furze, ebulliently and vehemently piping his unlikely victory.

‘To be king means being cunning, thinking ahead and planning,’ said Night Owl.

‘Wren did that in our game and so has earned the right to be Bird-King.’

and a special appearance by Mister Fox. 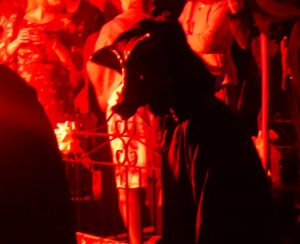