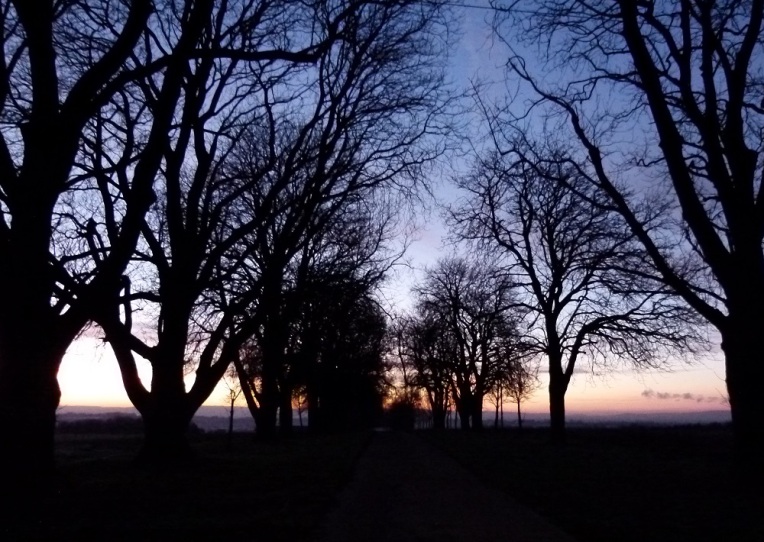 I followed the sound of laughter down the hallway to my son’s bedroom, curious as to the cause. “A champion,” read my son out loud, still lying in bed at half past nine with another cup of tea, “is one who gets up when he can.” I’m not entirely certain he was taking that quote the way it was intended, but I couldn’t argue with the facts.

I could, technically at least, lay claim to some such accolade under those terms… but having got up and taken the dog out by half past five myself, I am more inclined to think that makes me more of a madwoman than a champion. Except, perhaps, in the eyes of a certain small dog.

Leaves are piling up, stripped from the trees and in daylight they look like jewels spilled from a treasure chest. Being pitch black out there at that time though and raining to boot, I didn’t take the camera, nor would the silent shadow of an owl that parted the air above us have shown up on a picture. I regretted leaving the camera at home though when the dawn finally came up. The sky was an amazing canvas of pink and gold; a gentle dawn contrasting with the wind and rain overnight and no true herald of the howling gales to come.

I know old countryfolk and seafarers can read the skies and tell what the weather will be, fair or foul. To most of us, that gorgeous dawn would have held the promise of a beautiful day. Certainly it was enough to lift the lowest heart. Sometimes it is the mists that veil the coming of sunshine, sometimes the palette of the angels holds out a hope of beauty that is drowned by the rains. You can’t really tell without that inside knowledge born of intimate association with the skies.

Our own days are like that too in many ways. What seems to be a wonderful occurrence may hold pain, yet a seeming disaster may unfold into beauty. In their own moment, it is impossible to tell where any event may lead or what may come from a single instant’s choice. It is also pretty much impossible to follow every thread and filament that reaches out into the world and its future from an isolated scintilla of time.

I watched a film the other night, The Saragossa Manuscript, that illustrated how closely every story is intertwined and how seemingly unconnected events may, in fact, be the threads that form warp and weft of the same tapestry… each one contributing to a greater picture that can only be seen when observed from a distance. In this case, you had to be the watcher who saw the stories revealed on film. Sometimes we observe the same phenomena as we watch events working themselves out in the lives of friends and families. We itch to tell them what we can see, to make them see, just as we know when the monster will come up behind the next victim in a movie or we know the true feelings of hero for heroine but they seem blind to each other’s hearts. It is easy for the observer to see what is not calling upon their own intimate involvement.

It is much harder to see the patterns in our own lives. We are just one of the threads of the tapestry… a single strand of colour that makes little sense on its own. Yet we do observe ourselves. There is that inner watcher, and inner voice… consciousness and conscience, the other level of awareness that sees and examines our thoughts and motives all the time. We may ignore it, but we know it knows and eventually we will listen and begin to question our observation of ourselves.

That listening process is part of maturing… we tend to listen more as we grow up and grow older. This is also the basis of many techniques, such as mindfulness which has come very much to the fore over recent years. It is also the premise by which the maxim ‘know thyself’ can be applied to everyday life, something that forms a core part of the techniques we share in the Silent Eye. Strangely enough, it is through listening to the inner voice of awareness, becoming, in a way, seemingly more introspective, that we find a way to step back from our own lives and get a better look at the design of the tapestry. And getting a glimpse of that bigger picture brings a new confidence that we can take forward with every step.

Which is why, although the dog may feel I am a champion for taking her out so early, and I may have seen the day begin with a promise of beauty, we were both doomed to disappointment. For me, it was the clouds that rolled in on the gales… for the dog, well, as long as she doesn’t realise that her champion is really a Fool, we’ll be okay.